The authors of business-oriented internet articles will often use the tried and true technique of titling their article with a finite and numbered list. For example, who hasn’t wondered what are the seven things successful people do before breakfast? What are the nine steps to scoring that big promotion? What are the five most over-used internet click-baiting techniques? What happens next will amaze you.

I did a quick search (is there any other kind?) on employee retention. It resulted in many such articles – and seven seemed to be the magic number. Seven tips for better employee retention and so forth. A summative and provocative stock photo seemed to grace most of the articles. This is obviously one of those five most over-used internet click-baiting techniques I keep hearing about. I wonder what simple graphic you would think of first when prompted by the phrase ‘employee retention’?

Hands reaching out, large groups of professionally-attired and incredibly diverse groups of people with their smiles out and thumbs up, and magnets featured pretty heavily. I didn’t see any glue. The term “sticky” gets banded around a bit these days. Bungee cords or Marlon Brando from ‘The Godfather’ have some potential. Certainly, in the movies at least, organised crime has very effective employee retention strategies. I’m thinking Tony Soprano probably only had one employee retention technique rather than seven.

I like the magnet as an icon of employee retention. Implicit in the magnet symbolism is both attraction and repulsion. An organisation wants to attract the right number of the right type of people, hang onto them whilst they’re productive for a period that provides an economic return and stimulates a healthy amount of churn and turnover to bring in fresh people with fresh ideas.

Some turnover is desired. Some is not. Some turnover is expected. Some is not. If no one ever leaves an organisation, then fewer vacancies are created and fewer new people join. I did some work recently with a team whose least experienced member had been employed with them for twenty-five years. They didn’t so much need a workshop on employee retention as they needed to rent a copy of the movie ‘Logan’s Run.’

Common amongst the employee retention tips are to recruit people who fit, provide a development path, allow some autonomy, give tailored recognition, be flexible as an employer, promote from within, conduct ‘stay’ interviews not just ‘exit’ interviews, don’t be a jerk to society or the environment, and communicate openly and often.

I like the idea of the ‘stay’ interview. It would seem logical if you wanted to know the answer to the question, “What do I have to do or provide to keep my best talent around for longer?” to directly ask those people that question. They might answer that you should triple their salary. That would be fair enough if they were to triple their productivity. People might not truly know what motivates themselves or might encourage them to stay. They might not want to say it out loud or publically declare it if they did. They could be open, honest and accurate at the interview and, even then, their personal circumstances might rapidly change and they’re off to Oregon to throw clay with their spirit sister. If they say, “Give me a car park,” and you give them a car park, keep some measures as to how effective that is.

I think a useful primary application of the ‘stay’ interview after about their first three months is to try and mutually validate something you should have tried to achieve in the recruitment process – to get a close fit between the personal values of the employee and the organisational values of the employer. If you get that right or close, you’ll bump up the desired retention numbers. And, from a qualitative perspective, get more motivated and engaged employees while they’re there, regardless of how long they’re actually there. That might sound a bit woolly if you’re a panelbeater in a small town with three employees. I try not to sound like too much of a tree hugger but values-fit has a practical real-world relevance. Hiding culture problems is easier in a big organisation. Hiding people problems is imossible in a team of three. ("Everybody hates Barry"). Values like honesty and punctuality work both ways. You want them to show up on time and they want you to pay them on the day you said you would. And so forth. The fewer value clashes, the fewer doubts they get about sticking around. They may still keep an eye out for a better gig but you’re improving your odds.

Employers know not to look at things in isolation. Retention is part of a suite of issues needing to be looked at in conjunction with each other. Job design and recruitment determine the people coming in. Get that right (or at least – less wrong) and more of the people you take on will be ones you do actually want to retain. Same goes for orientation, performance management and training. But one thing employers definitely know is that you have to be realistic. Sooner or later, everyone (even themselves) is going to leave. Even Tony Soprano knew you had to have a succession plan. 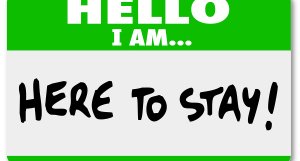