Do you want conflict with that?

I was buying my daughter a six-inch chicken sub on italian herb bread, toasted, with cheddar cheese. The ‘sandwich artist’ asked the lady in front of me if she wanted avocado on hers. The lady said, “Yes.” Usually, I’m happy to be the quiet, non-provocative consumer in these situations, especially as I had to get my timing right to pick up two other takeaway types from two other locations on my way home. I noticed the avocado situation because the question is usually accompanied by the statement, “That’d be an extra fifty cents.” Tonight it was not.

Maybe it was because it was Friday night and I was tired and hungry. I’d earlier been on the phone sorting out my own meal choices, wavering between ordering for myself a prawn fu yung or fish and chips so I ordered both. So, clearly, I wasn’t thinking straight. I drew the lady’s attention to the sign which declared, in not small print but not overly big print either, that avocado was an extra fifty cents. I wasn’t actually wearing a Robin Hood hat at the time which would’ve been appropriate. Not only because it would have been avocado-coloured but because I took the side of the little person against the big.

And conflict ensued. Not Syrian scale but more than anyone really needs on a Friday night. And all over fifty cents. But it wasn’t really over fifty cents. There was a principle. I assume there was. I was long gone and they were still trucking. Whether it was innocent or not, the seller needed to advise the buyer of the extra cost for the extra fruit / vegetable. (What the hell is an avocado anyway? I’m guessing fruit. Wikipedia tells me the original meaning of the word translates as ‘testicle.’ That’s probably inappropriate for this article. It’s certainly inappropriate for a sandwich. If you’ve learned nothing else today… )

If you think fifty cents is silly to get into a conflict over, many workplace conflicts arise over much less, certainly much less tangible origins. One of the breakast radio shows even has a recurring bit where people ring in and reveal anonymously specific instances of workplace irritations. In fairness, the radio show hosts took turns revealing their primary gripes with each of their own co-hosts, albeit using one of those voice-disguising apps. I only had the car radio on that station because the kids had left it there. I switched over to Radio New Zealand National like a proper grown-up, only to hear a politician and an interviewer yelling over the top of each other about a topic that wasn’t important and was a deliberately controversal grab for headline-seeking attention. And the media was happy to play along. I turned off the radio preferring to listen to other drivers swear at each other. All this conflict can’t just be over avocados, although the politician in question would probably be suspicious of foreign avocados.

I’d like to go back to my use of the word ‘irritation.’ Sometimes irritants serve a useful purpose in nature. The stone in our shoe that forms a callous toughening us up for the future. Grit in oysters give us pearls. Hecklers make comedians better. (That last one isn’t true and if you ever heckle me when I’m on stage, I’ll throw stones and shoes at you and see if that toughens you up for the future.) I’ll ask people sometimes to list words they associate with conflict and 80%+ of the time, the descriptors are negative. A bit of questioning from me though and people quickly self-discover many positive aspects of conflict. Certainly addressing most conflict situations is better than not dealing with it promptly, assertively and directly, ending up seething with repressed anomosity and venting out to a radio station who really can’t help you and don’t even give you a free CD anymore.

The co-workers at the radio show were bugged by one person adjusting the thermostat, complaining of being tired and being blunt. The recipient of that feedback put on a brave face of laughing it off for the sake of entertainment but I doubt many people would genuinely be that responsive. The answer in the real world lies somewhere inbetween, picking the most critical behaviours and ‘going ugly early.’ Better to deal with a pimple than a volcano. Describe the behaviour, outline the effects it has, state the need for change and specify the preferred behaviour, outline the benefits for all concerned and get some agreement. Then check back in, to keep it on track if change isn’t happening and to reinforce the person if it is.

Psychologists have studied the influence of reciprocity at length in preventing, mitigating and avoiding conflict. Give and take. With the dinner special of two foot-longs for $15, you can bang on as much avo as you like. Let’s talk bacon. 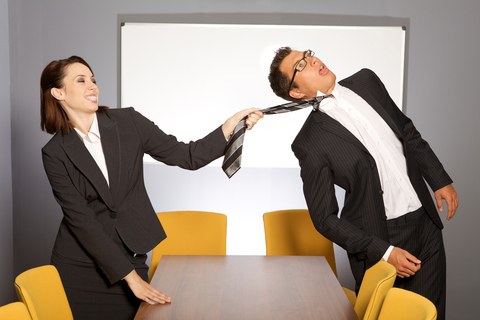