Here's an excerpt from my book 'Live Work Love: #Add10QualityYears'

Are we becoming less caring? A survey of Christmas wishes resulted in the following:

That doesn’t necessarily prove anything. I included it for a laugh. But if we were more interested in iPads than peace and happiness, would it matter? I don’t mean would it matter in a moral sense but in a literal sense. Does caring more improve our longevity, health and enable us to be more productive? If it does, does it matter what we care about?

We flourish when we are being relied on. There is a necessity to being necessary.

Dr Laura Carstensen of Stanford University observed that once someone begins to consciously anticipate death, they tend to disengage – to not care.

It’s not enough to care; you need to express that you do. Many of the books and studies I looked at emphasised how men are the ones who die first. Often, a reason cited beyond the physical ones is a general reluctance amongst men to speak freely and express emotionally. I’m not advocating a total hugfest here but men need to pick up the pace. Michelle Duff on stuff.co.nz wrote that a New Zealand Ministry of Health report shows death rates are as low as they have even been since mortality data was collected, but men are far more likely to die of preventable causes than women. Heart Foundation medical director Professor Norman Sharpe said it is a gap that will continue to widen as a "new wave" of health problems caused by obesity start showing up in the statistics. Men are up to twice as likely to die from preventable illnesses like heart disease and diabetes. In 2010, the male rate of death from coronary heart disease was 85.3 percent higher than the female rate. When it comes to dying in motor vehicle crashes and suicide, the gender gap becomes a chasm. Men are three times as likely to die in a car crash and more than twice as likely to kill themselves.

There are lots of reasons why men traditionally do not take care of themselves and do not express themselves. More important is the question of what it will take to encourage them to do so as soon as possible. Recent years have seen social media and advertising campaigns such as Movember and Blue October have highlighted mens’ health issues. Celebrities have been drafted in to raise awareness. Former All Black great John Kirwan’s work around depression and his book ‘All Blacks Don’t Cry’ is an obvious and effective example of this.

Ultimately society can chip away at big changes like this. I’m more interested in what individuals like you can do right now. You need to have a powerful reason to want to change your unhelpful and unhealthy behaviours. Again, the question of why you should is probably going to be answered with a who. Post their picture on your car’s dashboard. Next time you’re on autopilot and your car is steering itself towards a fastfood drive-through, hopefully that person’s image can remind you to steer away. We need powerful immediate and personal motivators to overcome ingrained behaviours, many of which have been with us since childhood.

If the Government is serious about reversing the obesity epidemic, it must introduce tough new rules on the packaging of children’s treats, Consumer NZ says.

The consumer advocacy group is calling for the control of marketing gimmicks on food packaging – particularly cartoon characters, free toys and on-packet puzzles targeting children. As reported by stuff.co.nz, Consumer chief executive Sue Chetwin said under-13s were particularly susceptible to tricks of the advertising trade. With a person’s lifelong food preferences formed at an early age, if companies rope them in young, they’ll likely be hooked for life, the watchdog’s report says.

American researchers have found children preferred the taste of McDonald’s-branded food over that in plain packaging, even though both were identical – and the same effect was seen with cartoon characters like Dora the Explorer. Chetwin said licensing kids’ characters from companies like Disney was costly, and companies would not invest the cash unless they knew it would pay off.

The problem with caring about things is that you get upset when the things you care about die, leave or don’t care back. That is a risk but the research clearly shows that life as an emotional roller coaster is more worth living than a flat emotional conveyor belt.

Counselling has its place but for situations that are less needing of expensive external professional intervention, try ‘Expressive Writing.’

Talking about stuff is random and disorganised. The process of writing requires you to think about what’s happened, its consequences, the alternatives and the future. Thinking then writing puts it into a structure and gives it meaning. And that’s what our brains require – to make meaning. We see shapes in the clouds because our brains like to find meaning in randomness. Until we get meaning, we do not get closure. The Expressive Writing technique has been shown to provide a:

Expressive Writing has been shown by Robert Emmons and Michael McCullough to make people happier, more optimistic, healthier and even got them exercising more. And it’s not just for getting closure on traumatic events. It is equally effective for reminding us of the positive things in our lives for which we should be grateful and a gratitude attitude has physiological health benefits too. In the same way that we can walk into a room with fresh bread baking, get wowed by the smell then not notice it after a few minutes, we get desensitised. If you walk out of the room, then back in again, you re-notice the smell. Expressive Writing enables us to re-notice the positives. Once a week, make some entries in a gratitude journal. You should probably do it daily but let’s start with tiny habits... Complete the following:

Then I will update my gratitude journal.

A practical manifestation of caring is washing your hands. It is nothing but a hassle in the now but it saves lives. People might die from an infection caught off your dirty hands but it is unlikely. It is probable that they’ll get sick. Every instance of preventable sickness is another unnecessary experience of inflammation, non homeostatis and disruption that our bodies have to endure. If we cared for ourselves and others, we’d wash our hands, as evidenced by the interior of my friend Mike’s toilet door:

A survey of people declared that 91% of people washed their hands after visiting restaurant toilets. The actual truth was 82% which is less bad than I was expecting. It just means next time you and four friends are out to eat, you have to work out who that 18% of non washers at your table are. A 1992 study by the New England Journal of Medicine found that 30-48% of staff at Intensive Care Units did not wash their hands properly. At this point, I’ll just finish by noting that Louis Pasteur refused to shake hands with anyone ever. Smart guy. 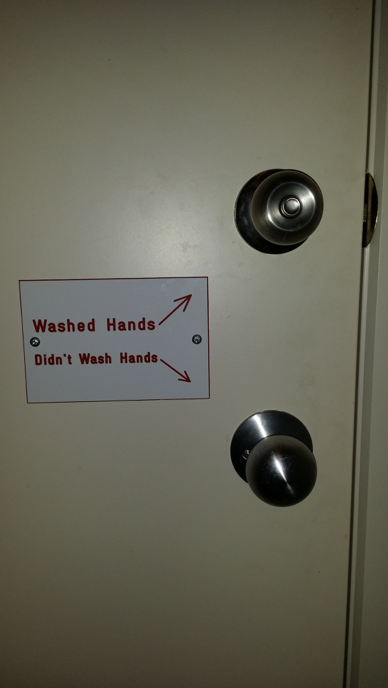