This article covers some workplaces that have gone for the fun and funky motif - perhaps some others have tried to, but in the superficial way where all the mini golf courses in corridors and Harry Potter secret doors and fireman poles cannot overcome the dull, uninspiring work infecting dulled, uninspired inhabitants.

Cosmetic efforts at dollying-up the physical environment or doing 'David-Brent-From-The Office UK' level of cringe-worthy activities is superficial, paternalistic and, at best, only effective in the short term.

"...one of the most important factors in engagement actually relates to internal employee happiness rather than external stimuli. This means, in the same way that buying children a lollipop will please them for a few minutes, 'faux fun' will have equally short-term benefits".

A boss with a rubber chicken is probably embarrassing or at best diverting attention from problems that demand competent attention. Several real chickens would probably be more effective at boosting morale, although you'd rather have it be your turn to clean the microwave than clean up after Katy Pecky and Christina Eggalayer.

I MC'd a conference in Wellington a while ago. In the afternoon, we were taken on a waling tour of a couple of high-profile workplaces - TradeMe and Xero. Ostensibly, we were looking at the physical layout of the workplaces as they were famous / infamous for being Googly / Appley in their fun, modern, even futuristic designs. And, yes, on arrival it was very visibly overt and different. Walls lined with classic album covers, a five-story spiral slide in the centre of the building and even a choice of several boutique beers on tap in the staff canteen with sweeping harbour views for all.

But these places also walked the talk. It was not superficial; it was representative. One meeting room was a caravan parked in a large space. It was an old caravan fitted out with the mod cons of an office meeting room. But it was also one of the first items ever sold on their site. It meant something. It represented something. But it was also practical, flexible and had genuine functionality. 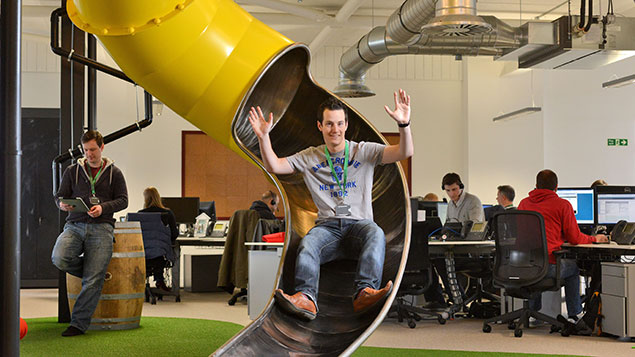