This TIME Magazine article by Jeff Haden is short, sweet and worth a read. It's theme to me seems to be that effective leaders deal with things in the 'now.' It suggests that many of the formal structures of organisations in dealing with people such as performance reviews, formal meetings and development plans occur too late to be useful. I agree... IF those reviews and plans are all that is done. My advice to leaders in the workplace is to do both - deal with stuff as it happens, which really is the smart and effective approach, BUT also keep thin but useful records so you can plug things into the formal structures. You don't want to create a massive administrative workload but you do want to capture an ongoing record.

Memory is a tricky thing. It isn't like pulling discs out of a video library and replaying exactly what happened. For a start, even your initial experience of the event is distorted by your perspective, as opposed to the perspectives of the other players. Whoever said that there are two sides to every story were severely underestimating. Time, emotion, biases and other stuff further distort memory. By the time we do need to recall a past event, our minds don't replay, they recreate. Assuming, of course, that it ever gets recalled at all. I barely recall what I had for breakfast yesterday. How could I, or my employees, be expected to accurately and fairly recall something that happened six months ago? You can't. You shouldn't.

Feedback (of whatever kind) to be effective needs to be as close to the event as possible. Saving it up for a performance review in six months is of little use and perhaps even counterproductive. I agree with Haden on that. BUT I do think that all those little events in all those 'nows' across a year or six months or whatever the review period is, need to be captured somewhere, so they can be presented in summary to give all concerned a holistic picture of performance.

Now I need to attend to what I'm going to have for breakfast today. I'm not one of you same-thing-for-breakfast-ever-day people. Your stomach might thank you but your mind gets miffed. I must search for research on what what this reveals about our mind and character. I suspect you same-thing-for-breakfast-ever-day people would make good accountants and proof-readers. I know I wouldn't! 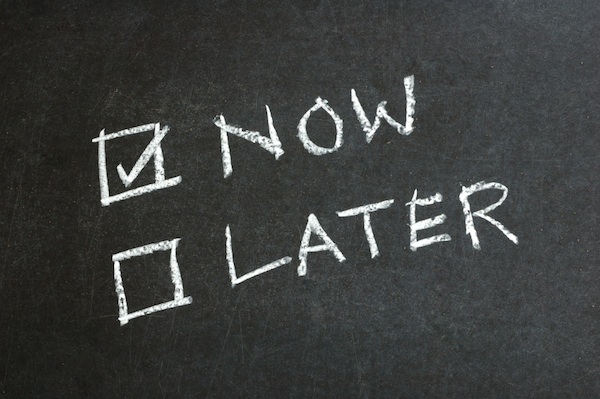